Banned Foods in Other Countries, But Not in the USA

I am not talking specifically about GMO foods, even though these foods could potentially be dangerous to our health. Am I talking about what are the 5 foods you should not eat? NO. But I do want to warn you about ten foods that were outlawed in other countries, but are easily bought and sold here in the United States. They are in every grocery store.

Most people, including myself, think that Salmon is very healthy choice of foods. We eat this often because we have been lead to believe that it is a food source that is not tainted with artificial steroids, growth hormones, or antibacterial medicines. However this is not the case. Australia and New Zealand have banned this farm-raised food. 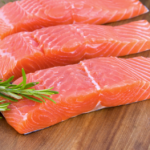 Farmed salmon are raised in crowded conditions filled with disease. The Salmon farms feed the fish an unnatural food diet which consists of grains. I am assuming that feeding the fish grains are because (a) it is cheaper, and (b) the fish get fatter much quicker.

But this artificial food diet is causing wide-spread bacterial diseases. To combat this, the farms are pumping the fish with loads of antibiotics and other medications. To make matters worse, this condition is causing the fishes’ flesh to turn an ugly gray-color. So the farms must induce a synthetic astaxanthin, which is made from petrochemicals to make the flesh look a more appetizing salmon color.

This has been banned in Europe, India and Japan. Mountain Dew is just one of several sport drinks and/or citrus-flavored sodas that contain this formulated substance.

This synthetic substance was originally made as a flame-retardant. BVO is known to cause reproductive problems and even behavioral problems in animals. It has been shown to accumulate in human breast milk. Pepsi Corporation has announced they were removing BVO from Gatorade, but so far have made no plans on removing it from Mountain Dew, or Diet Mountain Dew.

It is appalling to think how many foods we consume everyday that have artificial coloring, flavors, or addictive chemical substances. In fact, over 3000 additives are added to foods that even research has shown many of these additives are toxic and cause hazardous effects.

These foods are banned in Norway and Austria, because they cause behavioral problems in kids, and are associated with cancer, birth defects, and other health problems. The dyes that make the foods look real and appetizing, are in fact toxic to humans. These dyes have been outlawed from use in several countries, except of course, our own United States!

These dyes include red 40, yellow 5, yellow 6 and blue 2. These are some of the most commonly used dyes in foods in the USA. These dyes have been found that may be contaminated with carcinogens. Food labels in the EU require warnings if this food contains any of these food-coloring dyes. 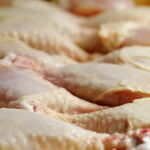 I find this quite upsetting which sets off an alarm ringing in my head. Why? Because I eat chicken about three times a week. I had no idea that chicken that is raised here in the United States for food consumption are fed foods with arsenic-based drugs! These drugs  take the animal grow faster, which is great for production purposes. However, it is not good for you or I. These drugs also give the meat a pinker and falsely healthier appearance. Arsenic, a known carcinogen, is banned in Europe and has never been allowed in animal feed.

5. Papaya That is a GMO Food 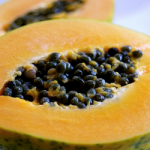 This genetically engineered food crop, grown mainly in Hawaii, has been banned by Europe because of the health concerns associated with GMO food sources. This wonderful fruit has been genetically engineered to resist the Ringspot virus. Research has showed that animals that are fed these GMO foods develop tumors, birth defects, intestinal damage, organ damage, not to mention sterility problems and premature death.

Is this food what you want your kids to be eating for a snack after school? I think not!

Doesn’t that sound appetizing? So what is Ractopamine? It is a drug given to animals that reduces fat in the meat. It is currently banned from use in 160 countries. Wow, I didn’t even know there were that many countries! Just teasing. This drug is used in 45% of pigs raised in the United States, in 30% of ration-fed cattle, but also given to turkeys, which has been kept secret on the amount of turkeys.

What this drug does to a human body is it causes problems with your cardiovascular system, and may also contribute to hyperactivity and chromosomal abnormalities. So you may be wondering how long have you been consuming this meat, and is it to blame for your children’s abnormality?

7. Bread Made with Potassium Bromate

Bromated flour is actually enriched with potassium bromate, which has been shown to be a carcinogen, which makes the dough more elastic. It has been banned from use in China, Canada, and Europe. Bakeries many years ago in the USA stopped using flour that had Iodine in it because it was more expensive than the cheaper substitute Bromate. The good news is that the producer Pepperidge Farms does not use Bromated flour in any of their products.

The reasons why it has been banned from use in other countries is because it has been linked to causing nervous system damage, thyroid problems, kidney damage and gastrointestinal problems.

I had no idea how common these twp preservatives are used in many USA foods. It is regularly in many USA cereals, nut mixes, chewing gums, meat, beer, dehydrated potatoes, and common butter spreads. BHA is banned from use in baby formula in the UK, and both BHA and BHT are banned in most parts of Europe and Japan.

The reason is because BHA has shown to cause cancer in Lab rats, and that BHT has been shown to produce organ system toxicity. I don’t want any of these preservatives in my food, Please!

This by far is one of the easiest foods to avoid, compared to the other nine mentioned here. If you buy organically produced milk, you will totally avoid the chances of drinking this toxic hormone. Read the label…as you should with every food product you buy. Some dairies have heard our concern about this hormone and have stopped treating their cows with this synthetic versioned hormone.

This product was first used back in the 1990’s by Proctor and Gamble when it was marketed as the first calorie-free and cholesterol-free fat substitute for use in fat-free snacks, chips, and French fries.

What is alarming about this supposable “safe” substitute is that Purdue University did a study in 2011 that lab rats that were fed this “fat-free” substance, the rats gained fat anyway. This product has been banned from use in the UK and in Canada.

In conclusion to this report you may wonder is our food really safe? I have to answer yes, with exceptions. There are obviously many more foods that should be on this list because of unhealthy ingredients or production practices.

My recommendations: know what’s in your food, plus get my Ultmate Detox Guide, and practice the information in the book; Buy organic foods whenever possible; totally avoid processed foods and buy foods in the store that are located on the outside aisles; Read labels of the foods you buy, I also would avoid foods that have more than five or six ingredients on label; Look for foods that state “GMO Free”, or made with “organic ingredients; Best to buy Grass fed beef.

Following this list of recommendations will not totally guarantee your safety from banned foods, but it will be the normal buying procedure for me and my family for now on.

In case you missed the link, you can get the Ultimate Detox Guide here. It is full of information to help you lose weight, avoid developing chronic illnesses and diseases, and learn to live healthier, happier, and slow down your aging process.

The Ultimate Detox Guide is FREE! It is my gift to you for wanting to live a healthier lifestyle.